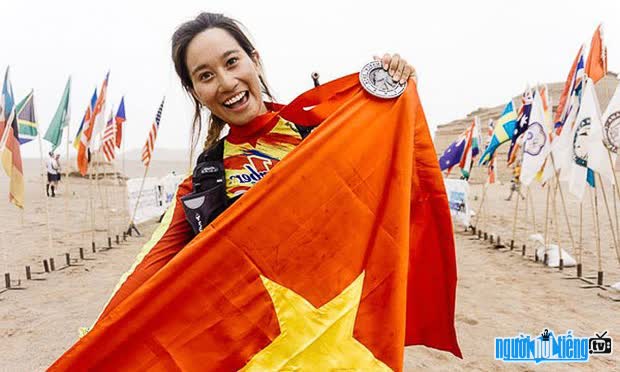 Who is Freestyle athlete Thanh Vu?
Thanh Vu's real name is Vu Phuong Thanh, she was born in 1990, is a famous female athlete of semi-professional running. It is known that Thanh studied abroad in Singapore, Canada and the UK, then returned to Singapore to work for financial analysis firm Bloomberg. However, after only a few months in the job that many people dream of, she began to feel discouraged and wanted to change. At that time, I happened to know 4 Deserts Race Series - the challenge of running about 1,000km through 4 deserts in 1 year, including Namib (in the coast of Namibia), Gobi (China), Atacama (Chile), and the country. Antarctic Ice Bureau. From a person who practices running for fun, Thanh Vu began to practice hard, setting the goal of conquering 4 Deserts Race Series.
After completing the 4 Deserts series, this female athlete continued to break through. Break your limits with a series of other challenges. She continuously tried running marathons, skydiving, ultramarathon 100km to Ironman 70.3 triathlon…In 2019, Thanh Vu completed a 522km run across the desert in Australia, 230km on the Arctic Circle and 273km through the Canyons. in North America. Before joining the World Champion Deca Ultra Trithalon, she had just completed a challenging mountain run in the Everest Trail Race.
Recently, Vu Thanh continued to make fans excited when he attended World Champion Deca Ultra Trithalon, also known as Swiss Ultra 2022. This is a triathlon tournament. including a 38km swim, 1,800km bike ride and 422km run, which is also the toughest tournament on the planet. The competition was held in Switzerland, with 23 athletes from all over the world participating, including 19 men and 4 women. Thanh Vu is the first Vietnamese athlete to participate in the tournament, also the only representative from our country. Completing the tournament, holding the Vietnamese national flag, Thanh Vu was the first to cross the finish line and won the women's side of the most extreme triathlon. Sharing about the race that lasted about half a month, Thanh Vu confided: “Some of you already know this information, you did not hear wrong. I've been on the most rigorous diet for the past 2 weeks, and unfortunately haven't lost much weight. However, the title of world champion of the International Ultra Triathlon Association is a gift of consolation”. It is known that SwissUltra is considered the most rigorous triathlon in the world. Athletes participating in the tournament must complete 38km swimming, 1,800km cycling and 422km running. The total distance of this arena is 10 times longer than a regular triathlon. Thanh Vu is a famous female athlete of semi-professional running

Events in the world in the birth year of Thanh Vu

Thanh Vu infomation and profile updated by nguoinoitieng.tv.
Born in 1990