Who is TV show Me Vang Nha - Ba La Sieu Nhan?
The show "Mother Absent - Dad is Superman" is produced according to the format of the Korean program The Return of Superman . The Korean version after many years won the 'Television Program of the Year' award voted by the audience within the framework of the KBS Awards. The program has the appearance of 4 families of artists: Khac Viet, JustaTee, Luong The Thanh and Duc Thinh. Besides the humorous elements or the awkwardness when taking care of the children of the fathers, it is the cuteness of the children participating in the program that will be the highlight of the show. "Mother Absent - Dad Is Superman" is expected to be the most awaited family-themed reality show this summer.
Singer Khac Viet confided : "We we we only need one more broom to fly. The program is to honor the mother in the family. I don't know fathers and brothers. How about me, from real life to the stage, with or without the camera. Let me say first that I was very upset. I realized that I do not have any superpowers at all. The greatest confidence is that I can adapt to different environments and situations, not complaining but will find a way to solve the program. received and loved".
Songwriter, rapper JustaTee shared with the media: "It's been quite a long journey for a new, never-before-seen show. And this is also a completely new experience for dads like me.I miss the team from V . company iettel Media has a program called Star enlisted, with this program, it's like 'Dad enlisted'. I feel like I've missed out on things in my small family, but Viettel Media and "Mother Absent - Dad Is Superman" have helped me realize many things. I have learned a lot of new things during 48 hours of taking care of my baby alone without my wife's help".
Director Duc Thinh said that in 48 hours when his wife was away from home, he took care of everything alone, causing him to be stressed at times, so he admired his wife even more. a href="/job/performer/thanh-thuy/k1">Thanh Thuy in taking care of children "Before, I thought taking care of children was very easy and didn't take too much time. . But right now, I find it as difficult as making a movie, I have to invest a lot of time and enthusiasm in it" - the male director shared.> has 18 episodes aired at 8:30 p.m., from April 28, 2022 on channel HTV7.

The program &quot;Mother Absent Home - Dad is Superman&quot; is broadcast at 20:30 every Thursday on channel HTV7 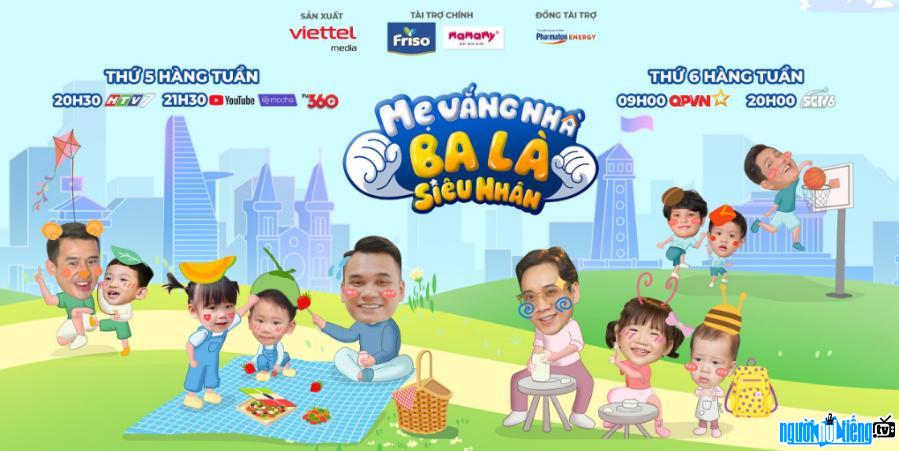 The program &quot;Mother Absent Home - Dad is Superman&quot; has the appearance of 4 families of artists