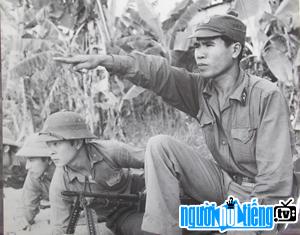 Who is Vietnam War Hero Tran Van Cat?
Tran Van Cut is a hero of the Vietnam War and a member of the Communist Party of Vietnam. He used to hold the position of warrant officer of the deputy commando company, local army of Chau Thanh district, Ben Tre province.
Fighting in the fiercely occupied territory, he and his teammates killed and wounded 170 enemies and captured 20. Sometimes he was assigned to be in charge of a team to monitor the situation of an American company stationed at Cau Cao blocking our transport corridor. He led an army to penetrate deep into the center of the enemy, destroy the enemy command post, and create an opportunity for his comrades to destroy the American company of 120 enemies. Tran Van Cut alone killed 7 enemies, destroying the entire radio station. On February 10, 1972, during the battle for Bo Xoai fortress in Tien Thuy commune, the enemy troops here consisted of a platoon, with solid fortifications. He led a group of soldiers to quickly and calmly cross the fence to attack and occupy the block. first and beat 2 more bunkers, killed 9 enemies, wounded 11. He was able to bring two wounded soldiers out safely.
On August 13, 1974, in the battle of Nuoc Da station in Son Dong commune, this position was guarded by an enemy platoon, consisting of 3 main bunkers, and 3 sub bunkers, he led a ancestor and made a great contribution to the annihilation of the enemy here.
Tran Van Cut was awarded the Order of the First-class Liberation War, the Second-class War of Liberation Order, and the Order of the War of Liberation. 3rd place, 3 times as an emulation soldier, 5 times as a brave siz, 35 degrees and certificates of merit of all kinds.
On November 6, 1978, Tran Van Cat was conferred the British title by the Party and State. the people's armed forces.