Who is Politicians Ho Tung Mau?
Ho Tung Mau, born Ho Ba Cu, is a Vietnamese revolutionary activist and politician. He was a member of the Communist Party of Vietnam and the Communist Party of China, a member of the Central Committee of the Communist Party of Vietnam,
Ho Tung Mau's father is Ho Ba Kien, a patriot, active in the Van Than movement, was arrested by the French colonial government and shot to death when he escaped from prison in Lao Bao. Ho Tung Mau was deeply influenced by his father, in 1916 he left his family to go to Thanh Chuong and Anh Son districts to teach, and wanted to find like-minded friends.
In 1919, he under the alias Ho Tung Mau, together with Le Hong Son, Nguyen Thi Tich, Ngo Chinh Hoc and Dang Quynh Anh, under the guidance of Dang Xuan Thanh secretly went to Laos, then to Siam. After 3 months in Trai Cay in Ban Dong, he and Le Hong Son were helped by Dang Thuc Hua to cross the border to Guangzhou - China. He rented the house of scholar Ho Hoc Lam to study Chinese and English, then went to An Dinh High School and Post School.

In 1923, Ho Tung Mau and Pham Hong Thai, Le Hong Phong, Le Hong Son... founded Tam Tam Xa group, a youth organization had patriotic ideology, was active in the revolution with the goal of regaining independence for Vietnam. In March 1924, he was assigned the responsibility by comrade Phan Boi Chau Bringing materials back home to propagate and mobilize young people abroad. However, in July of the same year, he heard that Pham Hong Thai had plotted to assassinate Governor General Martial Henri Merlin, so he returned to Guangzhou.

Late 1924, Nguyen Ai Quoc from the Soviet Union to Guangzhou, members of Tam Tam commune were contacted with him and were admitted to the Communist organization delegation, among them was Ho Tung Mau. He is active in the development of the Society. During the revolutionary activities, Ho Tung Mau also used many other alias such as Ha Qui, Luong Gay, Luong, Phan Tai, Ich, Ho Mong Tong, Ho Tung Ton, Ho Quoc Dong, Luong Tu Anh, Yen Chinh , Ninh Vo.

March 1926, Nguyen Ai Quoc introduced Ho Tung Mau to the Communist Party of China. In 1927, the Chinese Kuomintang was detained three times, the longest being held for 5 months, but he was finally released. At the end of 1929, he went to Hong Kong. There, he became a member of the Overseas Branch of the Communist Party of Annam. Also around this time, at Nghe An, the French colonialists conducted a trial in absentia for Ho Tung. Mau, and sentenced him to death for inciting people to go abroad, campaigning to form a party, and plotting treason.

With Ho Tung Mau's active participation, the Tong Van So case took place in a favorable direction. However, he was arrested by the British on June 30, 1931, for activities against the Hong Kong government, but because there was not enough evidence to charge him, the British government expelled him from Hong Kong. Port, and at the same time informed the French secret police to arrest him in Shanghai. On June 26, 1931, as soon as he arrived in Shanghai, Ho Tung Mau was arrested by French secret police. He was brought to the French concession, then brought back to Vietnam for trial. On December 6 of the same year, he was sentenced to death by the French colonialists at the trial in Nghe An, but it was later reduced to life in hard labor.

He was detained in a prison. Vinh, Lao Bao, then exiled to Kontum. At Kontum prison, he used poetry to nurture his will to fight, participating in the founding of "The Prison Association". In the following years, Ho Tung Mau was exiled to many other prisons. Until March 9, 1945, the Japanese coup d'état against France, he and his comrades took this opportunity to escape from Tra Khe prison and return to their hometown in Quynh Doi - Nghe An.

After the May Revolution. 8 successfully, he was invited by the Provisional Revolutionary Government of the Democratic Republic of Vietnam to Hanoi. Here, he was Ho Chi Minh nominated as Political Commissar and Head of Area 4 to prepare for the war. risk of war. On December 18, 1949, Ho Chi Minh established the Government Inspection Committee, and Mr. was appointed Inspector General. After that, he was appointed as the first President of the Vietnam - Hoa Friendship Association. He was elected as an alternate member of the Party Central Committee at the Second Party Congress.

On July 23, 1951, Ho Tung Mau died while on his way to Inter-zone IV. work. The cause of his death was shot by a French plane. After his death, President Ho Chi Minh signed a decree posthumously conferring the Order Ho Chi Minh to him.

Ho Tung Mau married Mrs. Nguyen Thi Thao, they gave birth to an only son, Ho My Xuyen, who died in 1947. 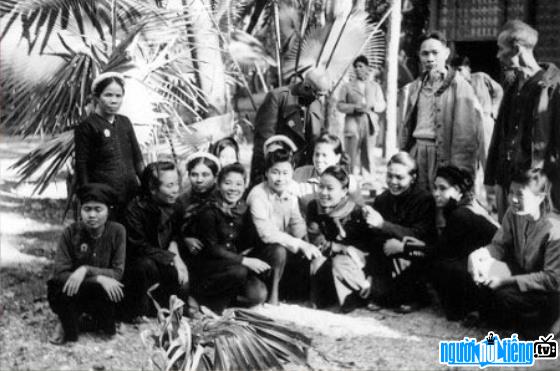