Who is TV actress Hilary Duff?
Hilary Duff, born Hilary Erhard Duff, is an American actress and singer.
Since 1997, Hilary Duff began to appear on the small screen through small roles or supporting roles in the films "True Women", "Playing by Heart". She was then offered the larger role of Wendy in the Casper Meets Wendy. After that, she was invited to participate in many other films such as "Lizzie McGuire", "Cheaper by the Dozen", "The Lizzie McGuire Movie", "A Cinderella Story"....
In the field of music, Hilary released her first single in 2002, the song "I can't Wait", the soundtrack of "Lizzie McGuire". After that, she released her first album "Santa Clause Lane" with many Christmas-themed songs such as: Santa Clause lane, Jingle Bell Rock, Last Christmas... Hilary's second album is "Metamorphosis", in The song "So yesterday" in the album became a hit song at that time. The album "Most Wanted" was compiled by her with many great songs such as: Wake up, Beat of my heart, Super girl and Break my heart... Then she released the album "4ever", which was released only in Italy. . The album "Dignity" peaked at number three on the US Billboard 200 and topped the Japan Oricon Weekly International Albums Chart at number one, peaked at number 25 on the UK album chart, and peaked at number three. on the Canadian album chart. The album was also certified gold. Album "Best Of Hilary Duff", is Hilary's second compilation album. This is the album she made to break up with the record label she is attached to. This is also the album that brought Hilary the title of Sexy Woman in Music, although this album only sold 5,500 copies in its first week of release in the US.
Hilary and the male singer Aaron Carter met when they were on an episode of "Lizzie McGuire". The couple dated for a year and a half and broke up. In 2004, Hilary began a relationship with male singer Joel Madde of rock group Good Charlotte . However, they also broke up in 2006. Hilary is also known when she participates in many charitable activities and is a member of the Kids with a Cause charity. In early 2007, she started dating Mike Comrie. On February 19, 2010, the couple got engaged and held a wedding ceremony on August 14, 2010. In 2012, Hilary gave birth to her first son, Luca. In May 2014, Hilary and Mike Comrie officially went their separate ways.
Movies participated:
Single:

Hilary Duff married Mike Comrie in February 2010. In 2012, the couple welcomed their first son, Luca. The couple broke up in May 2014. Hilary Duff with a young and beautiful style 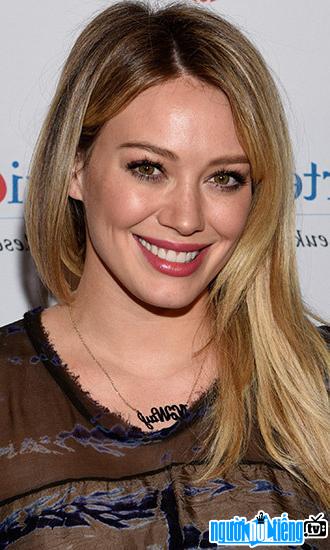 Events in US in the birth year of Hilary Duff

Hilary Duff infomation and profile updated by nguoinoitieng.tv.
Born in 1987