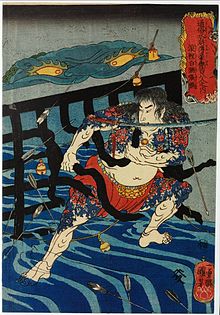 Who is Chinese War Hero Truong Hoanh?
Zhang Heng with the pinyin name Zhāng Heng, alias Chua Huo Nhi, is a character in the Chinese work Water Margin. He is the 28th general out of 108 leading generals of Luong Son Bac along with Lam Chong, Thach Tu, Quan Thang, Duong Chi, Lu Tuan Nghia , Cong Ton Thang, Yen Thanh, Sai Tien, Sai Tien, Chu Dong, Vo Tong, Lou Tri Tham, Dai Tung, Ho Dien Chuoc, Ly Ung, Muc Hoang... are the good guys of Luong Son.
In Thuy Huu, Truong Hoanh is described as a man of seven feet tall, with red hair, a yellow mustache, and triangular eyes. He has a talent for swimming and is familiar with the terrain of rivers. He is a very strong man, able to jump from the water as fast as a fish in any weather. He and his younger brother Truong Thuan live in Yet Duong Linh. The Truong brothers often disguised themselves as boatmen on the Tam Duong River and robbed the passengers of the ferry. Later, his younger brother left Giang Chau to work as a fisherman. Because of his addiction to gambling, Truong Hoanh stayed in Yet Duong Linh and continued to practice robbery on the Tam Duong River. -chien-tranh-trung-quoc/tong-giang/bblw">Tong Giang because he helped Tiet Vinh, he was chased by brothers Muc Hoang and Muc Xuan. Tong Giang and two public servants asked Truong Hoanh to take him across the boat to escape the capture of the Muc cousins. In the middle of the river, Truong Hoan was about to rob and kill all three people, but at that time Ly Tuan came to play and recognized Tong Giang. Ly Tuan introduced Tong Giang to his cousins ​​Mu and Truong Hoanh. Because of Tong Giang's name, cousins ​​Muc and Truong Hoanh made friends with Tong Giang. Later, Truong Hoanh, Muc's cousin all participated in robbing the Gianh Chau law school to rescue Tong Giang. Then they went up to Luong Son Bac together.
After 108 Luong Son heroes gathered, he was ranked 28th. After receiving the summons, the army Luong Son has devoted all his strength and conquest wars. Including the conquest of the Liao, Vuong Khanh, Dien Ho, Phuong Lap troops... During the Phuong La campaign, Truong Hoanh killed General Phuong Thien Dinh while this guy was riding his horse to escape from the city of Hangzhou. Truong Hoanh's younger brother was shot dead by Phuong Thien Dinh at Dung Kim Mon. Upon hearing the news, Truong Hoanh felt very sad, so he fell ill and died.

Image of character Truong Hoanh in the movie Water Margin

Truong Hoanh infomation and profile updated by nguoinoitieng.tv.
Born in 1085