Who is Lieutenant-General Vo Van Liem?
Vo Van Liem is a senior officer with the rank of Lieutenant General of the Vietnam People's Army. He was a former deputy political commissar of Military Region 9, a member of the delegation Vinh Long at the Vietnam National Assembly Deputies Class 12. Before that, he was the director of the Political Department of Military Region 9. In 2011, he was appointed to the position of Deputy Chairman of the Central Military Commission's Inspection Committee. In the same year, he was promoted to Lieutenant General. In 2016, Mr. Lien retired according to the regime prescribed by the state.
Recently, netizens are talking about the case of Lieutenant General Vo Van Liem insulting the traffic police when being trafficked by the police. He asked to stop the car because his car ran a red light. Specifically, at 11:30 a.m. on July 14, 2017, while traveling on Vo Van Kiet road, from the center of Can Tho city to the airport, Lieutenant General Liem's ​​car was stolen by a traffic police team belonging to the group. Binh Thuy district police - Can Tho asked to stop the car because his car exceeded the allowed speed. But it is worth mentioning that, when this task force ordered the driver to stop, the car did not stop but continued to run. Because of this, the traffic police had to use motorbikes to chase the vehicle to prevent it from entering the inner city Tp. Can Tho. When a traffic policeman invited the driver to get off the bus and present his documents, the driver did not obey the order. Meanwhile, another man in the car, Lieutenant General Liem (according to Colonel Tran Ngoc Hanh, deputy director of the Can Tho City Police Department, confirmed to the press), expressed disapproval. with the traffic police asking to stop his car, so he constantly cursed lieutenant Thanh. After that, Mr. Liem pulled out a plastic card and gave it to the traffic policeman on duty, and loudly demanded the dismissal of the director of the Can Tho Police Department, and then directed his driver to continue driving home. towards Ninh Kieu district. Then, on the internet, there was a clip recording the scene of Lieutenant General Liem shouting at the traffic police harshly, which was spread very quickly by netizens. On July 16, Mr. Lam had an exchange with the press. He thought that his car was not speeding, and because he was angry with the traffic policeman who worked with him, he scolded him. Mr. Liem also added that, after the incident happened, he called the Binh Thuy District Police Chief to report this incident and confirmed that his car did not violate traffic laws. At the same time, he also admitted to saying rude words to this traffic policeman. Mr. Liem also said that because he had an urgent job, he had to take out his industry card to apply. 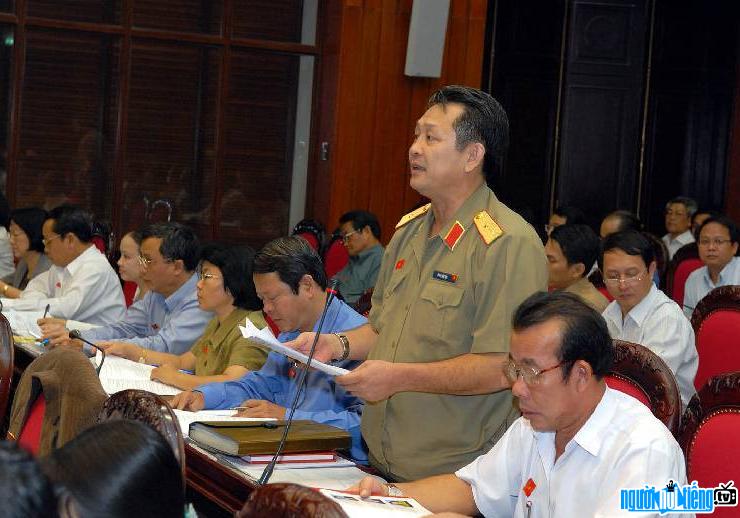 Lieutenant General Vo Van Liem was asked to stop by traffic police because his car exceeded the allowed speed.