Who is New Poet To Huu?
Poet To Huu real name is Nguyen Kim Thanh. He is a famous revolutionary poet and also a political activist.
In poetic composition, poet To Huu wrote many hexagonal poems with both classical and classical hexagonal nuances. His poetry is written in a formal apocalyptic form, with a very seamless and natural poetic style. To Huu also often uses the words slurs, tones, and rhymes to sing Vietnamese with the rich musicality of the Vietnamese language. To Huu's poetic inspiration often comes from political inspiration, from great and noble feelings, typically: ideal love, leaders, compatriots.
To Huu is also a politician. Talented, he has held important positions in organizations such as:
- In 1948: Deputy General Secretary of Vietnam Association of Arts and Culture;
- In 1952: Director of the Department of Propaganda and Culture under the Prime Minister;
- 1954: Deputy Minister of Propaganda;
- 1963: Vice President of Vietnam Union of Literature and Arts;
- Year At the Second Party Congress (1951): Alternate member of the Central Committee; 1955: Full member;
- Year At the 3rd Party Congress (1960): entered the Secretariat;
- Year At the 4th Party Congress (1976): Alternate member of the Politburo, Secretary of the Central Committee, Head of the Central Propaganda Department, Deputy of the Central Committee for Agriculture;
- Year 1980: Official member of the Politburo;
- 1981: Vice Chairman of the Council of Ministers, then First Vice Chairman of the Council of Ministers until 1986. In addition, he was also Secretary of the Central Committee.
- Principal of Nguyen Ai Quoc School
- Head of the Central Unification Committee
- Head of the Central Propaganda Department
- Head of the Central Science Department. He is also a Member of the National Assembly, term II and VII.
In 1996, he was conferred by the State the Prize Ho Chi Minh for Literature and Art (phase 1).
When he was in charge of the arts department, he was a fierce critic of the Humanities-Award movement. He was discredited because of his role as "a poet working in economics" through the currency crises of the 1980s, so he was dismissed from all positions, only working as a formal researcher.
Poet To Huu passed away at 9:15 am, December 9, 2002, at 108 Hospital, Hanoi.
Typical poetic works:
1. Can it be quiet?
2. Let's go!
3. Forever remembering Mr.
4. Waiting for you to return (translated poetry book, 1998)
5. Baby... Poland
6. Meet Mr. Ho Giao
7. Two kids
8. Ho Chi Minh
9. Remember to take my word
10. Purple flowers
11. Salute the soldier Dien Bien
12. Dear Mr. Nguyen Du
13. Spring song 1961
14. Homeland song
15. Bump!
16. Half-one-eyed fish
17. Following in Uncle Ho's footsteps
18. The sound of a bamboo broom
19. The song of the Perfume River
20. Ru
21. With Lenin
22. Home Garden
23. Viet Bac (poetry, 1954)
24. Vietnam blood and flowers
25. Where is Spring...
26. It's Spring
27. Isn't it strange
28. Collect
29. Mother Suot
30. Fresh Mom
31. Orphan
32. A harp
33. The South
34. Rain falls
35. In the past
36. May morning
37. Stalin! Stalin! [5]
38. Emily, baby
39. I go to
40. Me and me
41. That word
42. Thoughts in prison
43. Mutual relationship
44. When you are a child
45. Lao Bao
46. ​​Uncle
47. Mom Hau Giang
Achievement:
First prize in literature award Studying at the Vietnam Arts and Arts Association 1954-1955 collection of Viet Bac poems
The ASEAN Literature Prize of Thailand in 1996 for the collection of poems "One sound of the dan".
Ho Chi Minh Prize in Literature - Arts in the period 1 year 1996
In 1994, Gold Star Medal

At the age of 9, he moved with his father to live in Phu Lai village, now in Quang Tho commune, Quang Dien district, Thua Thien Hue province.
When he was 12 years old, his mother passed away. At the age of 13, he entered Quoc Hoc Hue School. In 1936, he joined the Democratic Youth Union. In 1938 he was admitted to the Communist Party. In April 1939, he was arrested, brutally tortured and exiled to Thua Phu Prison (Hue) and then transferred to Lao Bao Prison (Quang Tri) and many other prisons in the Central Highlands.
In March 1942, he escaped from prison and contacted the Party (about secret activities in Hau Loc district and Tam Quy village, Ha Tan commune, Ha Trung district, Thanh Hoa). In 1945, when the August Revolution broke out, he was elected Chairman of the Thua Thien - Hue Uprising Committee.

His father was a poor Confucian, did not pass and had to make a very hard living, but he liked poetry, liked to collect folk songs and proverbs. His mother was also the son of a Confucian, belonged to many Hue folk songs and loved her son very much. His mother died when he was 12 years old
He married his wife, Ms. Vu Thi Thanh, former Deputy Head of the Central Propaganda Department (now the Central Propaganda Department). Their love story was praised by them as a beautiful one, and Ms. Thanh wrote a memoir about To Huu titled Memories of the people who stayed. To Huu and his wife have three children, two girls and a boy. She passed away in 2012.

Summary of To Huu profile

Portrait of the new poet To Huu 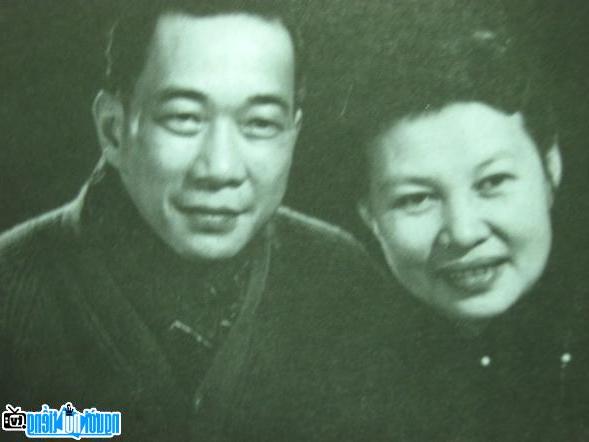 The picture of the poet To Huu taken with his wife - Mrs. Vu Thi Thanh The picture of the late New poet To Huu

Events in the world in the birth year of To Huu

Note about New Poet To Huu

To Huu infomation and profile updated by nguoinoitieng.tv.
Born in 1920