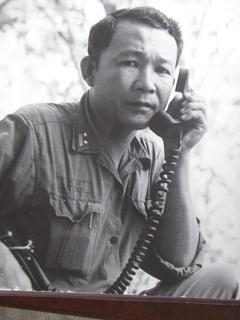 Who is Vietnam War Hero Le Huu Thoi?
Le Huu Thoi is a hero of the Vietnam War and a member of the Communist Party of Vietnam. He used to hold the position of regiment commander of the 1st Infantry Regiment Dong Thap province, Military Region 9.
Le Huu Thoi joined participated in 200 battles, he personally led many battles, made great contributions with the soldiers of the unit to kill more than 10,000 enemies. He alone killed 300 people, collected 55 guns of all kinds.
In June 1960, enemy troops consisting of 2 infantry battalions with armored vehicles swept into Ap Bac, My Tho district, where our troops lived, and were beaten to death by his unit. He led the company to resolutely organize many sortie groups, continuously fought the enemy, killed and wounded 180 enemies, destroyed 3 M113 vehicles, obtained 25 guns of all kinds, and maintained the battlefield. In this battle, he alone killed 16 enemies, obtained 4 guns.
In April 1972, in the battle, 2 enemy battalions were stationed at Vinh Kim branch in My Tho district, where the enemy troops stood guard. With a strong force to stop him from afar, he was always calm, determined to be precise, commanded flexibly, fought quickly, slipped deep into the middle of the position, then continued to attack each place in his base. war. He and his unit soldiers killed 2 battalions, there were more than 700 enemies, captured 70 alive, seized 200 guns of all kinds, 300 communication machines. In April 1975, he led his unit to attack Can Giuoc area Long An province destroyed 10 enemy outposts and captured them alive. 400 enemies had to pay for their lives, creating conditions for your unit to attack Saigon. In many other battles, with a spirit of determination to win with a flexible and clever command, he made great contributions to the unit to successfully complete all assigned tasks.
Le Huu Thoi was awarded by the State. awarded 4 Victory Medals, 1 first class, 1 second class and 2 third class.
On November 6, 1978, Le Huu Thoi was conferred the title Hero of the People's Armed Forces by the Party and State. people.